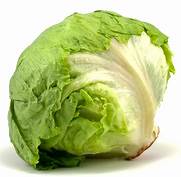 I do not understand iceberg lettuce. I bought one for the first time on Monday of the week and now, in the reflective calm of a Thursday evening, I have decided to bin it. What the hell is it? It's like crispy water, texture but no taste. When I took it out of the veg section of the fridge, it was sitting in a  pool of water. Do they eventually dissolve if you leave them long enough?
Well, having bought it, my canny Salopian upbringing dictated that I should eat it. It's weird. You cannot peel off a whole leaf, it disintegrates into small soggy pieces if you try. By Wednesday I had grown to hate it. I shredded it, thinking I could put in salads, but even the shredded pieces started to melt. By lunchtime today, I made the awful decision that it had to go. If only I had a pet rabbit, I thought, and then realised it would need to be a thirsty pet rabbit.
So, it is no more, it's an ex-lettuce, it has shuffled off its damp mortal coil, it has gorn to join the choir invisibule, no doubt whistling the theme from Handel's Water Music. It is defunct.
Bloody thing.
Posted by Jake Allsop at Thursday, August 08, 2019 No comments: Links to this post

A letter from the Prinicipality

Nefoedd da! I can hardly believe my eyes! My dear Mrs Scrote, I see you still haven't gone to join the Choir Invisibule, though you must be at least a centurion by now - isn't that what you call someone who lives to be hundred?
Of course I am dilated that you are still among us. I too am still among us, as you can see, but, I tell you, dear, it gets harder every year, what with arthuritis,  haerrimoids and inconsistence all making life a misery for a body. Still, nil carborundum, as the late Mr Trellis used to say, up girl and at 'em, there's a dance or two in the old dog yet, etc. It's funny how you can be married to someone for forty-something years and most of the time not understand what they're talking about. Did you have the same problem with Mr Scrote? Or maybe there wasn't a Mr Scrote - I have sometimes wondered whether you were one of those Greek women, beslians they're called, no offence, I was once fondled by a WAAF and I didn't flinch. Ah, the war years! Still, mustn't renimisce.
Anyway, I won't keep you, I expect you're still busy doing whatever it is that keeps your boat afloat.
Yours as before
Blodwen Trellis, Mrs, widow. retd.

PS What do you think of that Theresa May? I'm surprised they elected a woman without a bosom - they say she doesn't have a brain either, but who am I to judge? She wears nice hats, and that's something.
Posted by Jake Allsop at Saturday, July 20, 2019 No comments: Links to this post

Food that fights back 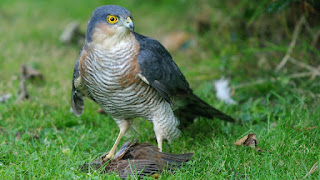 Looking at that gopher tortoise, the crusty meat pie on legs, reminded me that I don't like food that fights back. For example:
- chilli and curry dishes that burn your lips and your throat
- peas and small broad beans that refuse to let themselves be forked
- peanuts and any crumbly food that takes refuge between your molars
- slushy rice-pudding-type dishes that delight in falling on to your shirt front
- long wriggly pasta or noodles that remain dangling from your lips however hard you suck
Well, you get the idea.
I was also reminded of the notion of food that fights back when I watched a male Sparrowhawk on the lawn the other day trying to subdue a young Starling. If I were a male Sparrowhawk (by the way, in most species of raptor, the male is smaller than the female), I would stick to sparrows and finches. I can see the temptation to go for a Cumberland sausage rather than a chipolata, so to speak, but the struggle burns up a lot of energy. "Say not the struggle naught availeth", well, yes, in the end the Sparrowhawk got the better of the young Starling, but took quite a beating from the Starling's sharp claws and dagger-like beak before ripping its flesh to pieces.
No, I definitely don't like food that fights back.
Posted by Jake Allsop at Saturday, July 20, 2019 No comments: Links to this post 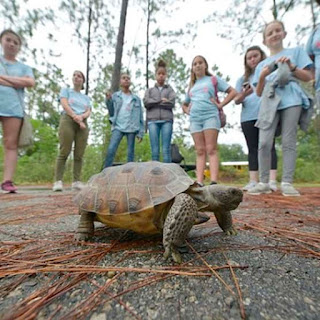 I recently received an email with an attachment about the Gopher Tortoise. In the body of the email there was a plea that I should revive this venerable blog (Old Scrote's Home). Because the request came from my Turkish grandson***, I have no choice but to obey - you know how the young always manage to have their way with the old.
So, above, is a picture of a group of Floridan children admiring what, to me, looks like a crusty meat pie on legs.
There, Deniz, torunum benim, you have succeeded in rousing me from my lethargy, though I cannot be sure how long it will last!

*** You might wonder how I come to have a Turkish grandson. I also have a Brazilian granddaughter, Bruna (whom I still think of as Bruninha, even though she is now married and a mother). It's no mystery: I like to collect bright young people to keep my brain from atrophying.

Posted by Jake Allsop at Saturday, July 20, 2019 No comments: Links to this post

Mrs Trellis gets in touch

Dear Mrs Scrote, your long silence had me preoccupated for a while, so I was relieved to hear from a mutual friend that the rumbles of your death were greatly exaggerated. It seems that you are not dead, just sleeping a lot more than you used to.
That is a condition I understand well, having been married for years to the late Mr Trellis, who always appeared to be asleep even when he was awake. I used to pop into his room from time to time, and the only way I could be certain he hadn't shuffled of his mortal coil was the fact that the tea in his cup had gone down by an inch or so.
Forgive me if I don't write more at this time, but, like you, I have very little lead left in my pencil.
Yours respectably
BTrellis, Mrs, widow, retd, still open to offers.

Posted by Jake Allsop at Thursday, June 21, 2018 No comments: Links to this post

Please think of the children 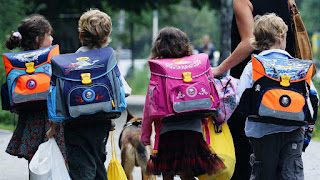 If you have a moment, please read the following:

http://capx.co/somebody-please-think-of-the-children/
Posted by Jake Allsop at Friday, April 08, 2016 No comments: Links to this post

Turning a blind eye is cowardice 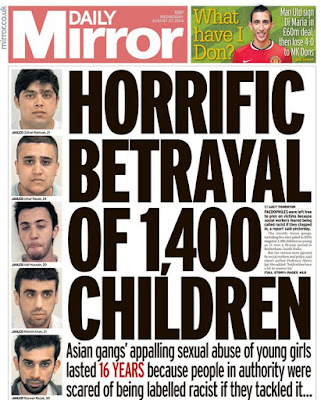 Even allowing for tabloid sensationalism, this is a gruesome story**. Nobody comes out of it well: local authority, local police, social services and so on, They all turned a blind eye because of the tyranny of Political Correctness, a wicked mechanism that suppresses freedom of expression and straight dealing. Please resist it whenever you can.

**Rotherham is not the only town where Asian gangs groomed and abused young girls. It was only when the first prosecution was brought in Oxford that other local authorities realised they could no longer sit on inconvenient truths.

Posted by Jake Allsop at Thursday, March 24, 2016 2 comments: Links to this post